The Diamond Force online slot game is an action game with a superhero theme. The latest offering from Microgaming online slots features four superhero characters, each with a special ability. Those abilities ... Read Review 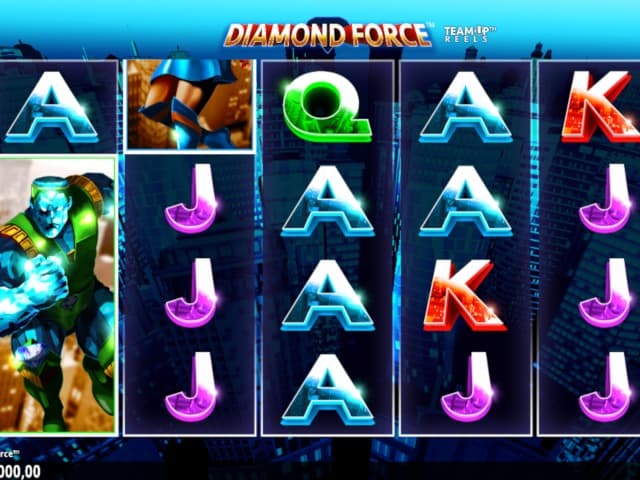 Microgaming teamed with Crazy Tooth studio for this online slot.

Diamond Force is a 5-reel game with four rows. One of its main features is “Any Adjacent Pays” so if three or more matching symbols appear on consecutive reels, going either right to left or left to right, is a winner even if they are not in adjacent rows. Payouts depend on your bet multiplier per spin.

Click on the button displaying three chips to change the size of your bet. Below that button you will see arrows pointing right; click on that to enable or disable quick spins. The smaller of the two circular buttons activates autoplay spins – you can choose as few as 10 or as many as 100 autoplay spins.

The game features Team-Up reels, when full stack symbols combine into new reels. If you get a combination of three or four full stack superhero feature symbols, it triggers the Team-Up Feature.

The Diamond Force game from Microgaming is completely compatible for mobile online slot play. Those who enjoy playing online slots for real money with their online devices, either Android or iOS, can play Diamond Force on those devices.

The paytable in Diamond Force online slot has an odd twist that might not please those who spend some time poking around for real money slots. You can access the paytable, plus an explanation of the rules and features, by clicking on the three bars on the right side of the screen (there are four small option buttons above the big “spin” button; the three bars are atop this column).

The good news is, getting three of a kind of a main character gets you 3 units. The bad news is, so does getting four of a kind – and five of a kind. Same with the lower symbols; it does not matter if you get three, four of five of a kind, it’s all worth the same 1.50.

The Team-Up Feature serves as a multiplier, so when the superheroes take up a full reel their prizes can add up quickly. They also lead to bonus spins (see more below). During the Team-Up Feature, triggering symbols form a new game board and the reels spin again to give credit awards and multipliers. The Team-Up Feature ends when all credits are tallied, then the accumulated multipliers come into play for your final tally on that bonus.

A full stack scatter symbol with at least two superheroes gives the player Team-Up Bonus Spins, where you can re-trigger. The full stack bonus symbol with all four main characters appears on Reel 5 only.

Players get bonus spins by stacking superheroes and can even get extra free spins during those bonus games.

Team-Up Bonus Spins serve as multipliers. One unusual feature of the Diamond Force online slot is that if you get the right superhero stacks, the multipliers can double up – your jackpot can be multiplied by a certain factor them multiplied by that factor again!

The Achievements bonus feature tracks the wins on the payout table with a check mark. Its tracks the status of how many different symbol combinations you have triggered.

Diamond Force is a good game with fun graphics, more designed for high rollers than anyone else. Those who play real money slots for lower stakes might like the hit frequency but they are less likely to enjoy the fact that getting five symbols on a paytable pays out the same amount as getting three of a kind.

Other Microgaming offerings include the Retro Reels online slot, a medium-variance online slot with a maximum payout of 440,000 coins and an enticing RTP of 97.5%. And the Tiki Vikings online slot offer low to medium variance, meaning that the payouts are more consistent but those who like to bet more won’t get as much out of is as they will with Diamond Force.

For more online slot games that you can play on your computer or on your Android or iOS devices, check SlotSource.com for reviews and more.