Microgaming, one of the top slot game developers, has always been high on Africa. The company has released several African-themed slots, including the legendary Mega Moolah. Another African offering has just been ... Read Review 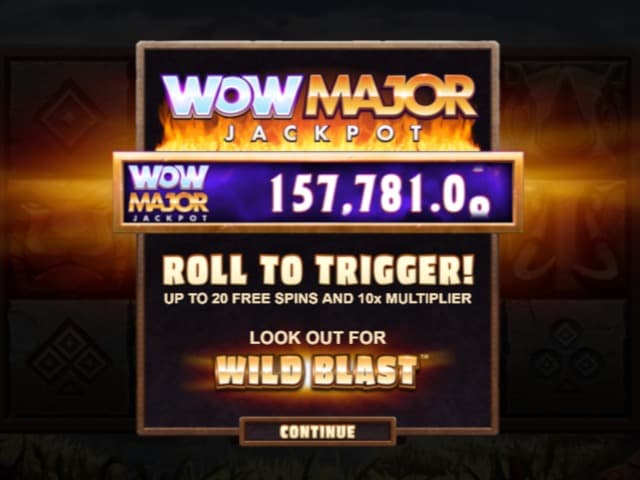 Microgaming, one of the top slot game developers, has always been high on Africa. The company has released several African-themed slots, including the legendary Mega Moolah. Another African offering has just been released from the Microgaming online slot games studio, this time titled African Legends.

The African Legends online slot comes with 5 reels and Microgaming’s familiar 243 ways to win mechanic. The base game is just about what you’d expect of a typical Microgaming slot, but its real ace in the sleeve is the progressive WowPot jackpot that features a massive prize. We can say that, in both theme and rewards, African Legends is pretty similar to Mega Moolah.

You can expect no big surprises when you open the slot to play it. It’s got 5 reels set against an African savannah backdrop, with soothing African tunes in the background. The slot is pretty nice to look at, with carved African stone legends occupying the reels.

The fact that the slot is progressive means that you can’t try all of its features for free. Progressive jackpots work with real money bets only, but you can still check out the demo to learn more about the African Legends slot.

The wild symbol pays the most – 10x your bet for five on a line. Other African-themed symbols pay less with the stone-carved card royals on the lower side of payments. Spinning the slot is simple thanks to the common layout and design that make things easy for new players.

Microgaming develops its slots on the HTML5 platform which means they’re playable on all types of mobile devices. You can enjoy the African Legends slot machine on your Android and iOS devices too. Thanks to a great mobile interface, you won’t have trouble to spin its reels on the go.

To start playing, you must set your real money slots bet size first. Your options go from 0.25 to 25 coins per spin. Once you’re comfortable with your bet, spin the reels and watch the stone-carved idols turn. The gold totem mask acts as the wild and pays the most. After that, the lion is the highest-paying symbol, bringing you 6 times your stake for five on a line.

The first feature active in the base game is called Rolling Reels. Whenever you win, winning symbols are removed and new ones take their place. The reels will keep rolling until there are no wins recorded. On any base game spin, you could also benefit from the Wild Blast feature. It adds up to 5 wilds on the reels randomly, with a Reel Roll coming up on every win.

And yes, we’re all interested in the progressive jackpot. Unlike Mega Moolah, it’s not triggered randomly. Instead, you’ll need 7 Rolling Reels in a row to hit it. The WowPot jackpot seeds at 50,000 coins but can grow bigger. If you’re lucky, you can win it all on a single spin – that’s the slot’s true winning potential, made even sweeter if you check out the best no deposit bonuses at SlotSource to get started.

African Legends has a lower-than-average RTP at 94.92%, but it is a progressive jackpot slot so its RTP is bound to be higher when close to the jackpot. The maximum non-jackpot reward you can win is 1,200 times your stake, or 30,000 credits at the top stake of 25. When it comes to the jackpot, it seeds at 50,000 coins, but will surely be bigger by the time you have a chance to win it. And check out the best slots bonuses at SlotSource today.

Is African Legend A Good Online Slot To Play?

The African Legends slot is likely another progressive hit from Microgaming. It is quite similar to the safari-themed Mega Moolah and features a progressive jackpot too. The jackpot is smaller than Mega Moolah but it is definitely a great reward for the luckiest players. Play African Legends for real money at the top Pennsylvania online slot sites or New Jersey’s recommended online slot sites and who knows? Maybe you’ll be the lucky winner.