Fans of iSoftBet’s original Gold Digger online slot game can rejoice. The company has gone back down this mine, this time adding the popular Megaways game mechanic to the mix. Go... Read Full Review 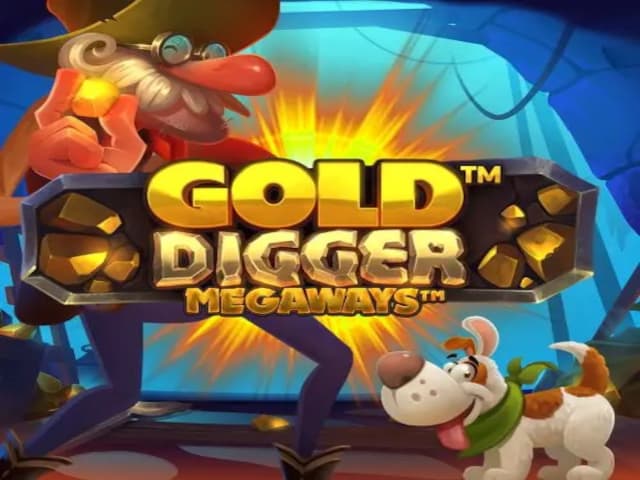 Fans of iSoftBet’s original Gold Digger online slot game can rejoice. The company has gone back down this mine, this time adding the popular Megaways game mechanic to the mix. Gold Digger Megaways is more than just an added mechanic though, it also offers several new features, as well as the introduction of an adorable dog character and an updated design. Let’s take a more detailed look at the real money slot in this Gold Digger Megaways slot review.

Mining has become an incredibly popular theme among top online slots in recent years, and as such, standing out from the crowd can be tricky. iSoftBet has managed to achieve this with the Gold Digger Megaways slot with the addition of some memorable characters and a lively design. Gus, the game’s main protagonist stands to the side of the reels clutching a golden nugget and smoking a cigar, while his faithful dog accompanies him. The title is brought to life with some smooth animations and the whole aesthetic of the free slot gives this the feel of a wild but enjoyable ride.

The Megaways mechanic has been a game-changer in the iGaming world, and it quite literally is a game-changer for the Gold Digger franchise. The Gold Digger Megaways builds on everything the first slot offered. It takes place across six reels, with each offering between two and seven rows. The maximum of ways to win you can have on one spin is 117,649.

The game can be played from $0.30 up to $30. These lower numbers are fairly consistent for Megaways titles, with bigger wins typically being on offer. Of course, the slot also features a standard Autospin option which allows players to set loss and win limits.

The Gold Digger Megaways slot looks great on both desktop and mobile devices. The Gold Digger Megaways mobile version is a perfect replica of the desktop version, with the game being supported across different operating systems and platforms. It can be played on Android and iOS and is available at a range of the newest slot sites that work iSoftBet.

The Gold Digger Megaways slot certainly provides plenty of explosive features to help you secure your wins. Firstly, there is the Cascading Wins mechanic that is used in all Megaways titles. This sees winning symbols replaced by new ones until there is none left on the reels.

During the base game, a number of random features can be triggered. The Max Megaways mechanic will make all 117,649 ways to win active on the following spin. Mystery Blast is a Mystery Symbol feature that adds TNT Symbols to the reels, exploding to reveal one symbol. The other two bonuses involve Boomer, Gus’s lovable dog. The first is the Boomer Bonus Add, which sees extra Golden Nuggets added to the reels, and the second is the Boomer Lose to Win, which transforms a losing spin into a winning one.

The main feature in the game is the Gold Hold & Win Re-spin round. This is triggered when players land five Golden Nuggets in one spin. These nuggets will all display multiplier wins. This is a typical Re-spin Round, with the game moving to another set of reels and players being given three re-spins. Every time a nugget lands, the spin count is reset. At the end of the round, all nuggets on display are counted up and paid out.
There are also modifiers added to this round in the way of gems. Blue Gems will an extra space to the reel on top, green ones will increase the nuggets that have already landed, Red Gems reward an extra life to keep the round going, and Purple Gems add a +1 to the overall Multiplier that is applied at the end of the round.

The Gold Hold & Win round is also key to winning the game’s Jackpots, with players being able to win the Mini, Major, or Mega Jackpots by landing their respective symbols during the round.

Enter the mine of wonders in the Gold Digger Megaways slot with the biggest welcome bonus you can find on SlotSource.

The Gold Digger Megaways RTP is 95.97%, though, this can be increased in the slot using the Bonus Buy feature to a strong 96.86%. The maximum payout is 864,630 coins. The slot has a medium volatility rating according to iSoftBet.

If you were a fan of the original Gold Digger slot game, then you are going to be very impressed with the Gold Digger Megaways game. If you have never played the original title, then you are still going to be very impressed with this. It’s a great expansion on the original game, with iSoftBet actually taking time to build on the first game and not just adding the Megaways mechanic and leaving it at that. The bonus features all work really well and the overall design of the game is very charming. This is definitely a mining slot that is worth digging out at the top New Jersey online slot sites and the best Pennsylvania online casino sites.

Gold Digger Megaways was developed by iSoftBet, which is a well-established and popular developer in the game.

Is the Gold Digger Megaways online slot game a sequel?

Yes and no. The game is an expansion of the popular Gold Digger slot released in 2020 by iSoftBet.

Can I buy a bonus in the Gold Digger Megaways slot?

Yes! The Gold Digger Megaways title has a Buy Bonus option. This will cost players 75x their stake.

When was the Gold Digger Megaways slot released?

Gold Digger Megaways was released by iSoftBet in February 2022.

Is there a jackpot in the Gold Digger Megaways slot game?

Yes! There are three jackpots in the game that can all be won in the Gold Hold & Spin Re-spin Bonus feature.

What is the RTP in the Gold Digger Megaways slot?

What is the Megaways mechanic?

The Megaways mechanic was developed by Big Time Gaming. It is a reel modifier that can provide a huge number of ways to win.

How many ways to win are there in the Gold Digger Megaways slot game?

The Gold Digger Megaways slot game has a maximum of 117,649 different ways to win.

Can I play the Gold Digger Megaways slot for real money?

Of course! The game can be played at a range of top online casinos for real money. You can find a casino that suits your needs by checking out our casino reviews.

What do the Golden Nugget Symbols do in Gold Digger Megaways?

The Golden Nugget Symbols will trigger the Gold Hold & Win feature when five of them land on the reels.