Crabby patty anyone? Or on second thought, maybe not, in fact, we’d steer clear of this very moody crab who’s dominating the reefs filled with rewards. The Crabbin’ Crazy slo... Read Full Review 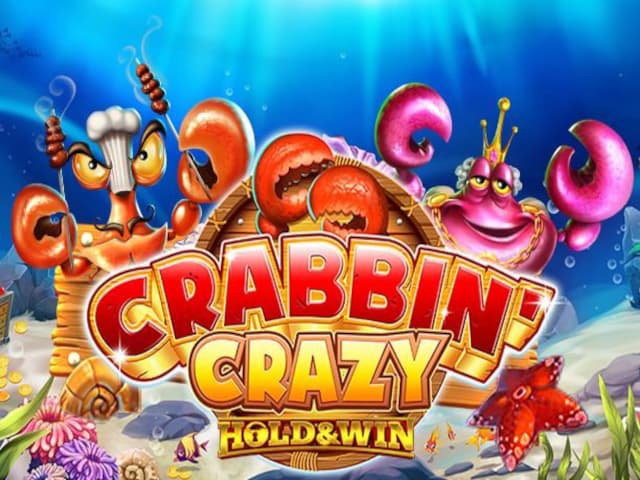 Crabby patty anyone? Or on second thought, maybe not, in fact, we’d steer clear of this very moody crab who’s dominating the reefs filled with rewards. The Crabbin’ Crazy slot is set on a 5-reel and a 3-row gaming grid with 25 fixed paylines, and since you’re the main fisherman, who knows what you will attract when casting your net deep down inside the cracks and crevices of the ocean? As a word of advice, do keep your eyes firmly fixed on the fisherman himself, he just so happens to generate the highest payouts within the game. Look for the underwater treasure at our recommended New Jersey online casinos and top Pennsylvania online slot sites!

From the beginning, it’s quite like watching the Spongebob Squarepants TV show, thanks to the animated and super quirky graphic animations.

You’ll definitely be in for a share of the deep dive with the very upbeat soundtrack playing away in the background, as you spin and win your way through this slot. Expect to hear the fisherman rustling around with his rod during each and every spin, leading you out into deeper depths.

Upon heading back to the shore, you’ll be presented with a whole host of the game symbols, such as the letters A, K, Q, and J, which lay at the lower end of the payscale. The higher-paying symbols include a maggot, the fisherman's fishing rod, a small boat, and the creepy crab claws. The crab claws are the most important symbol in the game, paying up to 16x for 5 when formed as part of a winning symbol combination on any of the paylines.

The Wild symbol is also a winning wonder within this slot, since it pays up to 20x for 5 on any one payline, and also has the power to replace all symbols apart from the Scatter and the Crab symbol. In the event that a player lands at least 3 of the Bonus Scatter symbols, a Free Spins extravaganza will ensue, and in addition to this, landing 5 or more of the Crab symbols will activate a winning Let's Go Crabbin’ Respin round.

How to Play the Crabbin’ Crazy Slot

Playing the Crabbin’ Crazy slot is as simple as gameplay can be. This slot is the perfect fit for any kind of budget, minimum wagers start from as low as 0.25 and can be increased to 25.00 in the chosen currency. To make adjustments to your wager, select the button that sits below the spin button. From here you will be given options up to the total wager. Players also have the choice to activate the Autospin option.

It’s a case of less wishing and more fishing, which you can enjoy from your chosen device. Players can tune in from their mobile smartphone, tablet, desktop, or laptop, all of which need to be supported by Windows, iOS, and Android. Diving deep has never been such a simple process!

The Crabbin’ Crazy real money slot has a total of 3 major bonus features and they are all packed with maximum entertainment. There is the Pick-a-crab feature which is overflowing with up to three different modifiers. Then there is the Hold & Wins Respin option, which offers players the chance to score some larger-than-life wins. Then last, but not least is the Free Spins.

In the middle of the base game, you may find that the Fisherman as a symbol can appear on the reels, awarding you the freshly fished “Pick a crab” feature, which will prompt you to choose from 3 different kinds of crabs, which all contain a certain type of modifier. The modifiers work as follows:

The Win Spin. This means that some boxes will be added to the reels. If any of the boxes do appear, then you will find that they change into the very same paying symbol.

The Bonus Add. The bonus symbols will appear on reels 1,3 and 5, to double the chance of activating the Free Spins Feature.

The Let’s Catch Crabs. This is where the Fisherman himself will make an appearance and gift you with up to four crabs.

In the event that you happen to land 5 or more of the crabs on the screen, you will trigger the Let’s Go Crabbin’ Respins feature. Initially, you will begin the round with 3 respins, and these will reset every time a new crab lands. After the respins have concluded, the crabs and all of the total winnings will be added together and credited to the player.
To trigger the Free Spins Feature, watch out for the bonus symbols which appear on reels 1, 3, and 5, in the event that 3 appear at the same time, then the free spins will trigger.

The maximum multiplier payout which can be awarded when playing Crabbin’ Crazy is a very modest 1,585x the original stake. The variance of the game ranges between medium to high and offers an average RTP of 96%.

What’s not to love about the Crabbin’ Crazy slot? There's a quirk factor all around from the sound to the graphics to the bonus features of the game. You’re guaranteed a good time and some pretty decent wins. If you loved this one – you’re going to love Big Bass Bonanza by Pragmatic Play – for a whole new fishing frenzy.

Who is the slot game provider for Crabbin’ Crazy?

The Crabbin’ Crazy online slot was created by premium game provider iSoftBet, which is a major player in the online gaming industry, having released such online slots as Gold Digger Megaways, Aztec Gold Extra Gold Megaways, and Merlin’s Revenge Megaways.

What’s the maximum payout to be expected when playing Crabbin’ Crazy?

Players can expect to receive 1,585x their wager as a maximum payout when playing the Crabbin’ Crazy slot.

Is the Crabbin’ Crazy a high volatility slot?

The Crabbin’ Crazy video slot is considered a medium to high variance video slot, so expect plenty more from where the big wins came from.

Is the Crabbin’ Crazy slot compatible with all devices?

Yes, the Crabbin’ Crazy video slot can be enjoyed anywhere across all devices, such as smartphones, laptops, desktops, and tablets.

Can I play Crabbin’ Crazy for free?

Yes, you can! The demo version of the Crabbin’ Crazy slot can be enjoyed for free at the top online casinos. The slot can be also played for real money as there are plenty of real cash prizes up for grabs!

How many paylines are there in the Crabbin’ Crazy slot?

The Crabbin’ Crazy slot contains 25 fixed paylines, all of which have the potential to reward heavily for winning combinations that have been formed.

What’s the RTP for the Crabbin’ Crazy slot?

The Crabbin’ Crazy contains a default Return-to-Player (RTP) of 96%, which is the average for a medium to high variance video slot.

What paying symbols will I find when playing the Crabbin’ Crazy slot?

The Crabbin’ Crazy online slot machine contains a range of high-paying and low-paying symbols, all of which are very quirky in appearance, along with the standard letters, playing cards, a Wild Symbol, and a Scatter Symbol, and the Bonus Symbol.

What Bonus Features will I find when playing the Crabbin’ Crazy slot?

Make the most of Free Spins, Respins, and other great Crabbed up bonus features when playing the Crabbin’ Crazy slot.

When was the Crabbin' Crazy slot released?