What you hear is what you get in High 5 Games’ latest slot release, Santa’s World. You will be immersed in the Father Christmas’ world, all snowy and filled with candy and ... Read Review 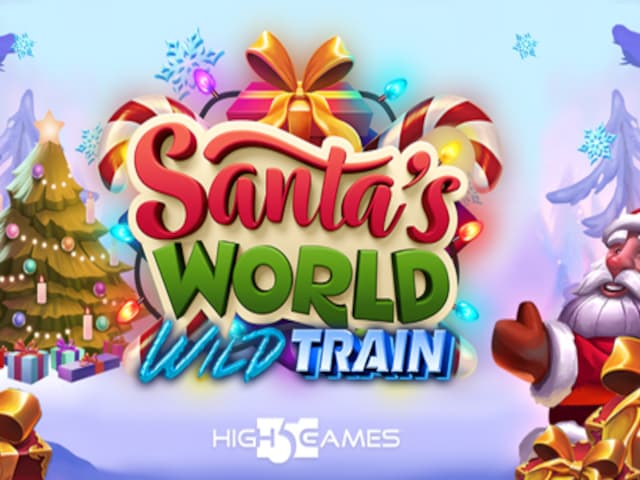 What you hear is what you get in High 5 Games’ latest slot release, Santa’s World. You will be immersed in the Father Christmas’ world, all snowy and filled with candy and presents. The slot arrived just in time for the festive season, here to provide you with real treats!

The slot is based on a 5x5 grid and offers 25 paylines for you to place wagers on. In terms of features, you’ll be seeing a lot of special symbols delivering special boosts, and you’ll benefit from the Wild Train Feature that will deliver exciting prizes. Of course, there will also be Free Spins, so you’ll be fully immersed in the gameplay, waiting for the big jackpot prize to land playing the slot at the most popular New Jersey online casinos and the best Pennsylvania online slot sites. Ready to find out more? Stay with us!

In a true High 5 Games style, nothing much is different in the Santa’s World slot in terms of setup compared to other titles by the developer. As you load it, you will see the forest in the background, covered in snow, with little swirly lollipop candies stuck in the snow. The reels are Christmassy, of course, filled with seasonal decorations and even a mistletoe on top of them. On their left, you see Santa climbing up a ladder with two stops, Free Games and Jackpot, that we’ll elaborate on later.

For now, you should know that the control buttons will be on the right of the reels. You’ll first see the + button, which, when pressed, shows a pop-up with some things you need to explore. You’ll see the Homepage button, the Speaker to enable or disable the sounds of the game, and the “i” button where the paytable is. Inside, you’ll see the crystal ball with a snowman inside as one of the highest-paying symbols, giving you 200x the wager per line, followed by the elf and the gingerbread man cookie, giving you 100x the wager per line each for a 5-of-a-kind combo. The snowflake, candle, swirly lollipop and stocking are the low-pays, giving you 50x the wager per line. The Christmas Gift Box is the Wild, but also the symbol that plays the Scatter role at some points, as we'll explain soon. It is also the symbol that gives you the best payout for a 5-of-a-kind combo of 500x the wager per line. But you’ll see four more special symbols in the slot, the crystal ball, the sleigh, the reindeer, and the reindeer with the green saddle on its back. These participate in the special Wild Train Feature, to be explained soon.

Moving on, from top to bottom on the right side of the reels, you'll see the Turbo button, followed by the Spin and Autospin buttons. The Bet configuration field is in the right bottom corner, where you can place wagers from 0.25 to 250 credits. Going left, you'll see the Win and Balance displays.

If you know High 5 Games as we do, you know that this is one of the oldest slot developers in the online gambling industry, which used to produce its slots in Flash, and these slots needed to be downloaded to be played even on a desktop device.

But since times change, and so do technologies, the developer has started creating its slots in the HTML5 format to be playable cross-device without the need of downloading any software. That’s why you can enjoy Santa’s World real money slot wherever you are, whenever you want, by just loading it on your device connected to the internet, via any browser, at any mobile casino.

The Wild substitutes for all symbols bar the four mentioned special symbols that participate in the Wild Trail feature. During the base game, the Wild appears on the middle reels only, while during the Respins, on all but the first reel. When four land, they combine with the 5th symbol on the payline to give you a win. But the four special symbols we mentioned earlier will also act as Wilds, substituting for other symbols, but not for the Gift Box during the Wild Train feature.

Now, the Wild Train feature is triggered when the two reindeer and the sleigh symbols appear on the reels together with the Wild. After you scoop any winning combos, these symbols will start moving across the reels, putting in motion a train move, and collecting symbols on the way, represented on the meter. Each Gift Box collected increases the number of positions covered with the reindeer, and each Crystal Ball places 3 to 7 high-paying crystal balls with the snowman inside symbols on random positions on the reels to provide you with big prizes. After all Gift Boxes and Crystal Ball symbols have been collected, you get a Respin.

During the Respin, all special symbols remain locked on the reels, so they become Sticky as you continue collecting Gift Boxes and Crystal Balls. When no more Gift Boxes or Crystal Balls are left to be collected, or you’ve triggered the Free Spins, the Respins will stop.

You trigger the Free Spins when you land 5 Gift Box symbols. All special symbols are carried over from the Respins and remain Sticky during the Santa’s World Bonus Round. The Wild Train Feature continues here, and you get extra Free Spin for each Gift Box or Crystal Ball you collect. So, Santa continues climbing the ladder or the meter on the left of the reels, about to reach the Jackpot level. 12 or more Gift Boxes are needed to reach it. Should that happen, you scoop a 500,000 credits jackpot prize! It’s easier with the best welcome bonus you can find on SlotSource. Claim it and go for the lion’s share of the jackpot prize!

Santa’s World is a highly volatile slot with an average RTP of 96.00% and a whopping payout potential of 4,610x the stake.

You’ve just learned that the jackpot prize alone can deliver 500,000 credits. But, if you play the slot for the max wager of 250 credits and you reach the top payout of 4,610 credits, this slot can provide you with a game-changing prize of 1,152,500 credits! Talk about a Christmas present!

Santa’s World is definitely one of the best Christmas slots we've seen lately, even though many developers have been giving their best to present the festive season in the right light. High 5 Games has done an amazing job with the slot design, the symbols are suited to the theme, but the slot definitely shines in the payout section. It can deliver over 1 million credits if you're lucky enough, so if you wish for a Christmas miracle, make sure you give it a try because you just might get it! If looking for other cute slots with the same theme, make sure you give Yggdrasil’s Christmas Tree or Relax Gaming’s Christmas Santa a try, as these are also great-looking and rewarding Christmas slots.

Yes, it is. According to High 5 Games, this is a very volatile slot.

What is the max payout in the slot Santa’s World?

The max you could win playing Santa’s World is 4,610x the stake.

Yes, it does. You get 3 Free Spins when you collect 5 or more Gift Box symbols.

Can you retrigger the Free Spins in the slot Santa’s World?

Well, for each new Gift Box symbol you collect or a Crystal Ball symbol, you get 1 extra Free Spin.

Is Santa’s World a jackpot slot?

As a matter of fact, yes. This is a slot that can deliver a jackpot prize of 2,000x the stake, should Santa climb enough levels up to reach the Jackpot level.

Yes, you can. The demo version of the Santa’s World video slot is available to play for free.

Is Santa’s World a Megaways slot?

No, Santa’s World is not a Megaways but a regular 5x5 slot offering 25 paylines.

Do I always need to place the max wager to win big in Santa’s World?

What is the RTP of the slot Santa’s World?