Cat to the Future Slot

Back to the Future is one of Hollywood’s most successful movie franchises. Besides being a cult film, it has been deeply embedded into pop culture and has made runs in a variety ... Read Review

Play Cat to the Future for Free Now!

High 5 Games - Cat to the Future 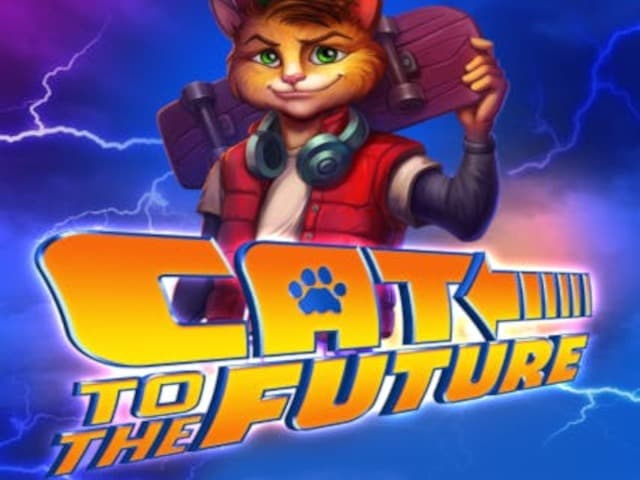 Cat to the Future Review

Back to the Future is one of Hollywood’s most successful movie franchises. Besides being a cult film, it has been deeply embedded into pop culture and has made runs in a variety of media. The slot industry has so far produced several slot machines based on the ageless hit, but High 5 Games may have the winner.

In their new slot, the company has mashed up the hit movie with the Internet’s favorite animal – cats. Called Cat to the Future, the new slot is a fun reimagining of the Michael J. Fox classic, this time with a cat in the lead role.

These cool cats are doing all the lines and scenes from the popular movie with Multipliers and bonus rounds to spice things up even further. If you’re a fan of the original film, you’re going to love this High 5 Games real money slot.

Cat to the Future Slot Setup and Paytable

The Cat to the Future slot game has a 5x3 setup with 243 ways to win that looks like it popped up straight out of the 1985 movie. It’s got the same logo and carries the same visual design, with the cats reprising Michael J. Fox’s and Christopher Lloyd’s roles.

It’s fun to see Biff Tannen and all the other characters “dressed up” as cats. The slot’s audio effects and soundtrack are on-point too, creating an immersive experience you’ll surely enjoy. Make sure to check the paytable and see what the character symbols pay. Those pay more than the low-paying card royals that are clad in shiny gold.

Cat to the Future Slot on Mobile

Like all High 5 Games, Cat to the Future is optimized for mobile devices. It was developed on the HTML5 platform and is easily playable on Android and iOS devices at the best mobile casinos for free or for cash.

How to Play the Cat to the Future Slot?

Ready to turn the flux capacitor and step back to the future? Before you do that, you must pay a certain price. The wagers go as low as $0.20 and as high as $200 per spin. When you’re ready, hit the Spin button and watch the wheels light up.

The base game in the Cat to the Future slot is pretty straightforward. You’ll be lining up symbols for winning combinations, with Wilds stepping in to complete them. The Wild only appears on reels 2, 3, 4, and 5 and plays its well-known role.

It’s all about the Bonus Round in this slot. Get to the Free Spins bonus, and you’ll find the slot truly blossoms.

The Free Games round is accessible with 3 Bonus symbols on the same spin. These award 15 free spins, with the action taking place on a new set of reels. The free games will be played at the same wager level and the same Multipliers from the spin that resulted in the Bonus Round.

It may also give you access to the Bonus Round where you can win the maximum of 5,000x reward.

Cat to the Future Slot RTP and Max Payout

The RTP of the Cat to the Future slot is set at 96%. It’s a highly volatile slot, so be mindful of your wagers. The slot’s winning potential goes up to 5,000x in the jackpot round.

Cat to the Future Slot Verdict

Cat to the Future is a great homage to an even greater movie franchise. It’s fun to see the lead characters played by cats and the bonus features make the slot even more exciting. If you’re ready to face Biff and the gang by going back to the future, turn the flux capacitor on and go back to the future at the best Pennsylvania online casinos and recommended New Jersey online casinos.

Great Scott! It’s a hell of a ride!

Cat to the Future Slot FAQ

Which studio published the Cat to the Future slot?

The Cat to the Future slot was developed and published by High 5 Games. It’s one of the hottest studios at the moment, releasing hits such as Bewitching Beauties and Lucky Lassie.

Is Cat to the Future a highly volatile slot game?

Yes, it is. If you want to get the most out of your bankroll, you need to be careful with your wagers.

What’s the Cat to the Future slot’s RTP?

The slot’s RTP is set right at 96%. It’s the industry average for high variance slots, although we would have liked to see it higher.

What’s the lowest wager I can place on the Cat to the Future slot?

The lowest wager you can place in the Cat to the Future slot is $0.20 per spin. That’s low enough even for the stringiest players and just right to try the slot.

Is there a jackpot in the Cat to the Future slot?

Yes, there is, and you can win it via the Blinking Bucks feature. It has the highest cash reward in the slot worth 5,000x your wager.

Can I play the Cat to the Future online slot for free?

Absolutely. You can try the demo mode of the Cat to the Future slot on your PC or mobile phone.

Is the slot available on mobile devices?

The Cat to the Future slot is developed on the HTML5 platform, so you can spin it on the go on your Android device or iPhone.

Do I need to download the Cat to the Future slot app on my phone to spin it on the go?

No, there’s no need to download the slot on your phone – you can play it from your browser.

Is there a Free Spins Round in the Cat to the Future slot?

Yes, and it is triggered by 3 or more Scatters. The Bonus Free Spins Round comes with a few special features that up to its winning potential.

How does the Racking Up Riches feature work?

The Racking Up Riches feature is active on any winning spin. At that point, non-winning symbols will be removed, with new ones taking their place. These cascades will go on as long as there are new winning combinations.