You’d be forgiven if you found the name Phoenix Graveyard a little confusing – after all, isn’t a phoenix defined by its ability to rise from the dead? Well, yes, but ELK ... Read Review 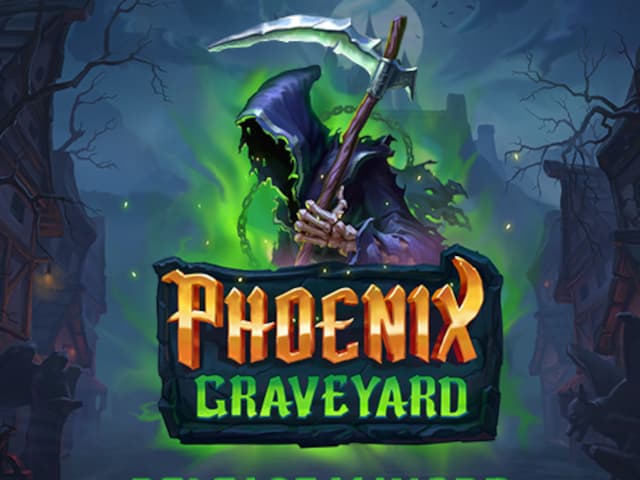 You’d be forgiven if you found the name Phoenix Graveyard a little confusing – after all, isn’t a phoenix defined by its ability to rise from the dead? Well, yes, but ELK Studios has opted to go with a unique theme for this game. The Phoenix Graveyard slot takes place in a graveyard, in a town called Phoenix. Oddly enough, there is also a Phoenix on the reels. This mish-mash of themes and genres is a prime example of some of the wackiness on display in this slot, with a ridiculous number of paylines, some interesting best slot bonuses, and big winning potential on offer as well. Let’s look at all of this in this Phoenix Graveyard slot review.

ELK Studios has doubled down on the doom and gloom of the graveyard part of its title. The slot takes part place in a haunted old town with rickety old houses and a mist settling below the reels. The whole thing comes to life with some really nice animations. The Grim Reaper appears on the reels and gets slash happy during the action. The titular Phoenix also flies off the reels as the Wild and helps add some color to the otherwise gloomy setting. While the darker palette and gloomy vibe may not be for everyone and is certainly a change of pace for ELK Studios, the overall aesthetic is quite striking and well put together.

ELK Studios has gotten quite creative with the overall gameplay of the Phoenix Graveyard slot game. The title takes place on a standard 5x3 grid found in most top online slots, but things can get changed up rather quickly. Tombstones will encase random positions on the reel and display a number. The symbols on the reels will then split into that number, increasing the number of ways to win in the process. The slot starts with 243 ways to win but this can get seriously high on any given spin. ELK Studios states that the slot has ‘millions’ of ways to win and doesn’t quote a specific number.

The game has a standard wagering range, with players able to wager between $0.20 and $100 when playing Phoenix Graveyard for real money. Everything else here is kept fairly conventional, with the slot offering the standard Autoplay and Turbo functions.

You can experience the unique gameplay of Phoenix Graveyard on a selection of different devices. The game runs smoothly on both Android and iOS operating systems and is supported across different mobile browsers. The gameplay experience remains the same, with very few changes being made to the game when it moves to a smaller screen. Most new online slot sites now support mobile play, so players should have no issue finding somewhere to spin the reels.

There is a good range of different features that are available for players in the Phoenix Graveyard real money slot game. The bonuses here are all about the Wilds and the Free Spins. There are two Wild Symbols in the game – the Phoenix and the Grim Reaper. These both have different features but are both useful. The Grim Reaper Wild triggers respins when it lands on reels 3-5. For the respins, it becomes a Walking Wild and can slash high-value symbols, causing them to split. The respins remain until the Reaper walks off the reels.

The Phoenix Wild will also stick on the reels during the respins. These will randomly jump around the reels into new positions with each spin. If they land on a tombstone, they will take the number of the tombstone as a Multiplier.

If the two Wilds land on adjacent reels, then a battle will take place. One of three outcomes then happens – one of the two gets a Double Multiplier, or the Phoenix jumps and leaves behind a feather which will then transform into a new Wild.

The Bonus Spins round here is launched by landing between three and five Scatter Symbols. Players will get six spins with 1 Phoenix Wild, 8 with 2 Wilds, or 10 with three depending on the number of Scatters. During the round, Phoenix Wilds will appear where the Bonus Symbols landed and remain for the duration of the round. They will jump around as always. Tombstone Symbols will also become sticky during the round as well.

Depending on location, players will also be able to use the X-iter option. This allows the game to be played in different ways for different stakes. There are five options, each of which comes at a different cost and with more advanced modifiers and bonuses. The highest of these is the Super Bonus, which costs 500x the stake and ensures five bonuses land on the next spin.

The Phoenix Graveyard online slot game has an RTP of 95%, putting it below the industry average. The maximum win is 10,000x the overall stake. This is a nice amount that will appeal to players. The slot is considered to be highly volatile.

Phoenix Graveyard is a creative and enjoyable slot from ELK Studios. The darker tone may not be for everyone, but the bonuses and mechanics make this a slot well worth taking for a spin at the top-ranked New Jersey online slot sites and the best Pennsylvania online casinos. The two Wild Symbols play off each other really nicely and the huge number of ways to win is an innovative touch that is no doubt going to attract players.

Who made the Phoenix Graveyard online slot game?

How many ways to win are there in Phoenix Graveyard online slot?

There is no exact number available as the number of ways to win in the Phoenix Graveyard online slot. The slot game starts with 243 but as symbols are slashed, this can increase into the millions according to ELK Studios.

What is the Wild Symbol in Phoenix Graveyard?

There are two different Wild Symbols in the Phoenix Graveyard slot game. There is the Phoenix Wild and the Grim Reaper Wild. These also both have their own separate functions and can clash with one another during the game’s battle bonus feature.

How much can I wager in Phoenix Graveyard?

The Phoenix Graveyard slot game allows players to wager between $0.20 and $100 on any individual spin.

Can I play the Phoenix Graveyard slot game for free?

Yes, you can play the Phoenix Graveyard slot for free. However, you will not be able to do this in every country. Some countries do not allow players to play online slots for free as a result of government legislation.

What is the most I can win in the Phoenix Graveyard slot?

The maximum win that can be secured by a player in the Phoenix Graveyard slot game is 10,000x the overall stake. The game does not specify how this is won.

Can I buy a bonus in the Phoenix Graveyard slot?

Yes, you can buy a bonus in the Phoenix Graveyard slot. The slot has the X-iter feature. This offers players five options on how to play. This grants access to bonus features or an increased number of certain symbols for a pre-determined price.

Where is the best place to play Phoenix Graveyard for real money?

You will be able to find the Phoenix Graveyard slot at a selection of top online casinos. In order to find one that suits your needs, take the time to check out some of our more detailed online casino reviews.

Can I play Phoenix Graveyard on my mobile?

Yes. Phoenix Graveyard has been fully optimized to work on a number of different devices. This includes both phones and tablets. It is supported on multiple platforms and different operating systems.

How often will I win on Phoenix Graveyard?

There is no guarantee you will ever win on an online slot game. The Phoenix Graveyard slot is considered highly volatile, which means that players should not be expecting to secure regular wins in the game.