Mad scientists and their crazy inventions make a fantastic theme for slot games. With their potions and experiments, they can deliver crazy wins and that’s on full display in Sti... Read Full Review 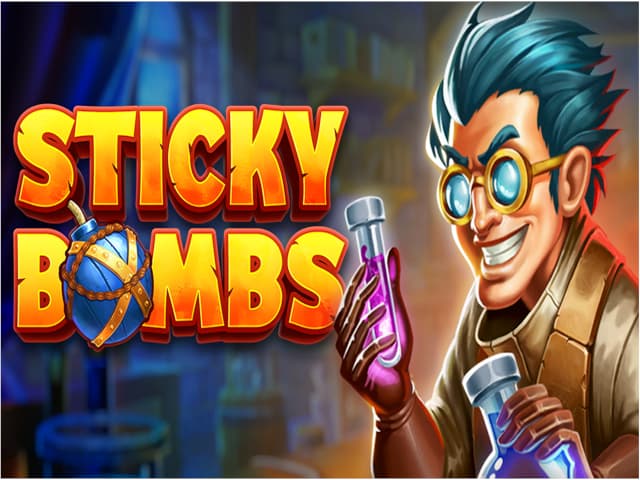 Mad scientists and their crazy inventions make a fantastic theme for slot games. With their potions and experiments, they can deliver crazy wins and that’s on full display in Sticky Bombs. The full name of the slot is Professor Cooper’s Sticky Bombs. As one can guess, the professor is in the center of this exciting slot game developed by Booming Games that has 20 paylines, a bunch of Sticky symbols, and fantastic winning opportunities.

Set in a lab where crazy experiments unfold, the highly volatile title can pay well over 1,000x the wager. Its RTP of 95.80% doesn’t instill belief in big wins, but it can deliver some pretty solid returns. The slot experiments with a Mini Bonus round in the base game where the Sticky Wilds come into play. Mixtures of random materials and potions can create a beautiful mess in this lab that can constantly deliver wins worth hundreds of times your stake.

Available in all Booming Games casinos for free and real money, this sticky bomb experiment is as thrilling as it sounds. Play the Sticky Bombs slot with the best slot bonus to win big!

While it is an experiment in the Bonus Round, Sticky Bombs doesn’t experiment with the layout and design. It’s a 5x3 slot set in a lab with many potions on the reels and scientific tools in the background. Booming Games has done a great job with the visuals and the audio. This is a science slot and it looks and sounds like it.

The red potion pays the most – 37.50x for six. A maximum of five of the other potions can land on the reels, but they pay less than the red one. There are a few mid-paying symbols as well as three minors represented by card royal gems.

Thanks to the familiar layout and design, Sticky Bombs is a great slot that you can easily spin on any device.

If you prefer to spin the best slot games on your phone, you’ll be glad to know that Sticky Bombs is available on instant play platforms on Android and iOS devices. You don’t need to download any slot apps to play it on the go. Just head to your favorite casino from your browser, find the game and spin away.

The action begins when you place your wager. It can range from $0.20 to $200 per spin, a range that fits the bankroll of new players and seasoned veterans. There are 20 paylines to win across with a few special features in the base game that make the spinning worth it.

Wilds and Multiplier Wilds can substitute for any other symbol in the game except for the Scatter. The Red Flask Premium Symbol can land in a batch of two, paying double than the regular variant. Aside from it, the Wild is the highest-paying symbol in the game, delivering wins of 50x for five on a line.

The main feature in the base game is a Random Bonus Reel. It works just like it sounds. It includes a random mixture of three special symbols which can be the Wild Bomb, the 2x Multiplier Wild Bomb, Professor Cooper himself, or a Double Flask. The Random Bonus Reel occurs randomly and thanks to its special features such as Double Multiplier Wilds, it can lead to bigger wins.

The Sticky Bombs Slot Bonus round is triggered by three Scatters. These award 10 Free Spins and introduce Sticky Green Goo Wilds on the reels. During the Bonus Round, all Wilds that land on the reels turn Sticky and remain for the duration.

All the other features are active including the Random Bonus Reel. This time, however, Professor Cooper appears with a +1 or +2 to his image, granting you extra spins.

Sticky Bombs is a highly volatile real money slot with an RTP of 95.8%. It has 20 paylines to win across with the maximum projected win being 1,445x the wager.

Sticky Bombs is a fun science experiment in professor Cooper’s lab that can deliver pretty decent returns. The slot’s Random Bonus Reel is a nice and innovative addition to an otherwise straightforward slot game with no surprising features. The Sticky and Multiplier Wilds are great, though, making it a fun scientific slot ride at the most popular New Jersey online casinos and top Pennsylvania online slot sites that’ll appeal to all kinds of players.

Who released the Sticky Bombs slot?

The Sticky Bombs slot was produced by Booming Games. It’s not a major studio but it’s a pretty great one, delivering hits such as Aztec Palace, Gunspinner, and Wild Diamond 7x.

The RTP of the Sticky Bombs slot is set to 95.8%. That’s near to the 96% industry average for highly volatile slots such as this one.

Is Sticky Bombs a Megaways slot?

No, it isn’t. It uses a regular and lucrative math model that doesn’t complicate things with varying reels or other stuff.

Can I hit a jackpot in the Sticky Bombs online slot?

There is no jackpot to hit in the Sticky Bombs slot. It’s a regular online slot with regular rewards, but it can still pay over 1,000x the wager.

Is there a Free Spins Round in the Sticky Bombs slot?

Yes, there is. You can trigger it traditionally with three or more Scatters. You get 10 free spins to start with and all Wilds turning Sticky for the duration of the Bonus Round.

What does the Random Bonus Reel do in the Sticky Bombs slot?

The Random Bonus Reel occurs randomly in the base game and Free Spins Round. It occurs when a mix of specific symbols land on the reel, turning it into a Bonus Reel.

The Sticky Wild Bomb Wilds turn that way in the Bonus Round. They also carry an x2 Multiplier that can nicely boost your wins at any time.

Is there a promo code I can use on the Sticky Bombs slot?

No, we currently have no promo code you can use on the Sticky Bombs slot. Keep checking our site regularly – there might be one to use later.

Which slots are similar to the Sticky Bombs slot?

The Sticky Bombs slot is similar to Dr Toonz by Play’n GO and Madder Scientist by Betsoft.

When was the Sticky Bombs slot released?