Who doesn’t love an 80s cult classic? It seems that our beloved Goonies are back with a bang, and they're better than ever in Blueprint Gaming’s The Goonies Return slot. It’s a ... Read Review 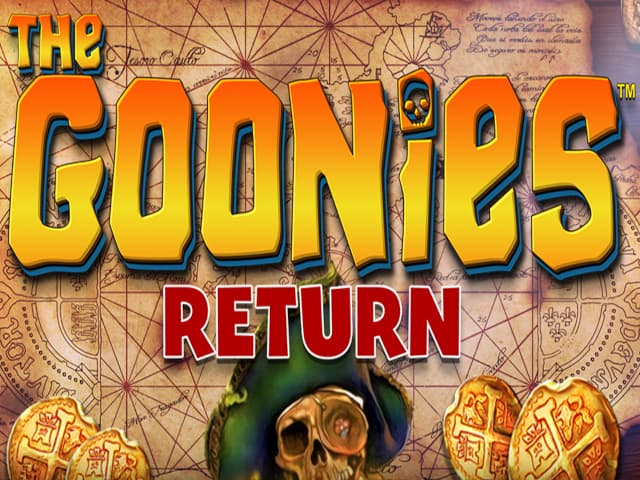 Who doesn’t love an 80s cult classic? It seems that our beloved Goonies are back with a bang, and they're better than ever in Blueprint Gaming’s The Goonies Return slot. It’s a follow-up from the original The Goonies slot and the later updated version, The Goonies Jackpot King.

Get ready to whisk all the way back to the good old days – it’s still a favorite in modern days, adding an extra dose of nostalgia to the online slot experience as a whole, where the Goonies were on a mission to save their family homes from the treasure hunters. It’s the kind of concept that twists the strings of your hearts, featuring plenty of action, romance, friendship, and all-around adventures, with plenty of good vs bad scenarios. Now, you can experience it all over again, within a 5-reel, 3-row video slot, and a big win potential at the top-rated Pennsylvania online slot sites and the best New Jersey online casinos.

From the beginning of the game, you’ll notice popular character voiceovers and mischievous music, all alongside the tongue-in-cheek character animations making an appearance from the onset and throughout. All of the action alongside the menaces will take place on a 5x3 game grid, where there’s a total of 20 treasure-filled paylines for you to win across. What’s more, is, you’ll know the exact direction in which you’re going in thanks to the backdrop featuring the renowned treasure map, which is a staple object within the movie.

Your all-time-favorite characters Mikey, Chunk, Mouth, and Data offer some attractive payouts worth 10-15x your stake. The highest-paying symbol happens to be the skull and crossbones which pays 25x the stake for five within a winning same symbol combination. The lowest of all are the J-A playing cards. The Doubloon Wild Symbol has the power to replace all other symbols, where it can form symbol combinations alone, which will equate to the same value as that of the skull and crossbones.

How to Play The Goonies Return Slot

You can begin the quest with a wager range starting from 0.10, which can be increased to a maximum wager of 100.00 in your chosen currency.

You can throw it all the way back in time with The Goonies Return slot from anywhere you like, the game is compatible with laptops, desktops, smartphones, and tablets and supports all iOS, Android, and Windows devices, so you can access this treasure-hunt mobile slot from anywhere or everywhere.

The Goonies Return is an action-packed adventure, even more so when considering its many features. All features are distributed between a total of 6 of the One-Eyed Willy modifiers, with 6 different bonus rounds which are available to be triggered. The One-Eyed Willy modifiers can trigger on any base game spin at random, when triggered it will reveal 3 keys. Players are given the option to pick from the following three modifiers.

The first one is the Truffle Shuffle Wilds, which can make an appearance on the reels in random positions and can transition into Wild Multipliers. The Hidden Riches is the second, where a Mikey Wild appears in the center reel, and the Goony Symbols appear on the same spin with a chance to transition into a Wild. The third is the W-invention Reels, where you can expect to see Data hitting the reels with a boxing glove to move up 5 reels, revealing the same symbols.

The Lucky Coins are Mystery Symbols that will be added to the reels, whilst transforming into the same matching paying symbols when they are hit. The coins may even reveal cash symbols, where respins will continue to take place until no new Mystery Symbols land. The Bonus Boost will allow additional Bonus Symbols to the reels. Last, but not least the Win Spin, in plain and simple terms, will award one hell of a winning spin.

Dive into the sea of bonus features with the best slot bonus!

That’s not all, alongside the six initial features, there are a whole host of random modifiers which can turn any losing spin into a winner, as follows:

The Scythe will completely reset the reels, where they will transition into a win.

The Dynamite will explode across the reels, by upgrading any win.

The Shooting Spikes will remove a certain amount of columns to make way for a new win.

The Cave Collapse will remove all symbols and follow on with a cascade where all old symbols will be replaced by new ones.

The Booby Trap Bonus offers players a key, which they would turn to the left or right. In turn, this reveals a Bonus Feature, which reveals the name of a new Bonus Game, which will be awarded to the player.

The Waterslide to Wealth Bonus entails walking across a trail, where you’ll collect the rising values of prizes. When you hit 'Collect', the feature will end. Working all the way to the end will lead players to a new one called the Big Money Bonus Round.

The Fratelli Free Spins awards players with a total of 10 Free Spins. In the event that a Super Sloth Wild hits, it will highlight the original position that it appeared in. For the final Free Spin, a Cash or a Wild Symbol will appear in the positions that have been highlighted. If a player hits 5 or more of the Cash Symbols, they will then be awarded Momma Fratelli Money Spins. This particular bonus feature starts with 3 spins which will reset when new Cash Symbols have landed. As the round draws to a close, the player is given the choice of one of three keys, where they will have further chances to win even more Free Spins, an additional bonus feature, or the option to collect their accumulated wins and reverse back to the main game.

The Final Voyage Free Spins incorporates an entire reel Inferno Wild symbol which begins on the left-hand side of the reels. For all of the following spins, it will move a single reel closer to the right. You will notice how Data, Mouth, Chunk, and Mikey symbols will be Wild on the 1st, 2nd, 3rd, and 4th spin. So, for the final 5th spin all characters will transition into a Wild, followed by 5 doubloons appearing on the screen.

The One-Eyed Willy Riches Bonus Feature is best described as the Hold and Win feature. beginning with 3 Free Spins. When landing any of the Cash Symbols or the Character Symbols, the feature will unlock the following effects:

• The Mikey Symbol will award an all-in-one multiplier.

• The Data Symbol adds to the total number of total respins, offering up to 1.

• The Chunk Symbol adds increased value to all of the other symbols which appear in front of the player.

• The Mouth Symbol collects all of the total wager values which appear on the screen.

• The One-Eyed Willy Symbols adds an entire column to the side panel.

• The Sloth Symbol restarts the power of any other character symbol on the board.

The Goonies Return is considered a medium volatility slot with a default RTP of 95.5%, where maximum payouts can reach as high as 250,000 credits if you’re willing to up your game for this particular mission.

It’s easy to fall in love with the level of team spirit which was shared between all characters in the movie and even more so when powering through The Goonies Return slot itself. It’s a feature-heavy game, overloaded with various Free Spins Features, Multipliers, and Mini Games, adding to the pre-existing theme of what it means to be an adventurous teen.

For a medium-volatility game, the potential to win or to be on the receiving end of some precious payouts is highly likely in this epic slot, making us want to keep on playing the slot for real money or just for fun until we’ve landed deep inside that treasure chest.

Who created The Goonies Return slot?

The Goonies Return video slot was created by Blueprint Gaming, a popular slots software provider within the online gaming industry. Blueprint Gaming brought us such online slot hits as Rick and Morty Megaways, Fishin’ Frenzy, and Return of Kong Megaways.

What is the RTP in The Goonies Return online slot?

The Goonies Return contains a default Return-to-Player (RTP) of 95.5%.

What is the maximum win in The Goonies Return slot?

The expected maximum multiplier wins can reach as high as a whopping 250,000 coins if you’re spinning all the way through to those epic big wins.

What is the best online casino where I can play The Goonies Return slot?

Players can choose from a wide range of top-ranked online casinos. We’d recommend sourcing the casinos with the best slot bonus offers before beginning your The Goonies Return slot journey since it will add even more ammunition to your experience.

What online slots are similar to The Goonies Return?

Now, if you enjoyed The Goonies Return slot, then the chances are that you’re going to love the following slots, all of which will immerse you directly into one hell of an adventure. Why not try the Rick and Morty Megaways slot or the Inspector Gadget slot by Blueprint Gaming.

Is The Goonies Return a high volatility slot?

The Goonies Return is considered a slot of medium-volatility nature, meaning less risk is required in order to hit the big wins, which is never really a bad thing.

Should I always wager the maximum amount on The Goonies Return slot?

No, placing the maximum wager amount is not a solid requirement to be successful when playing The Goonies Return video slot, we’d recommend sticking to a budget that is suitable to your individual requirements, level of interest, and playing style.

Yes, you can play with real money and win real money when playing The Goonies Return video slot. So get spinning and start winning.

What’s the most I can wager in The Goonies Return slot?

The maximum wager when playing The Goonies Return slot is capped at 100.00 in the player's respective currency.

What kind of The Goonies Return slot symbols will I find in the slot?

When playing The Goonies Return slot, you can expect to find all regular symbols, including Wilds, Scatters, and Bonus Symbols. In this case, fans of the movie will be glad to know that the most important symbols are formed with the original movie characters, and they are able to bring amazing rewards and additional features into the mix.