As the third and most thrilling slot creation by the collaboration between Blueprint Gaming and Lucksome, the Loki: Lord of Mischief slot will have you going for glory and great prizes with ... Read Review 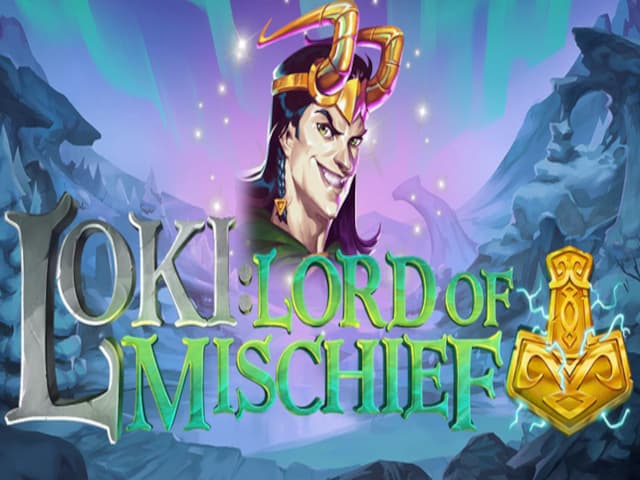 As the third and most thrilling slot creation by the collaboration between Blueprint Gaming and Lucksome, the Loki: Lord of Mischief slot will have you going for glory and great prizes with the gods of the past. Be prepared for the good, bad and ugly when playing with Loki – the god who has the most tricks up his sleeve. There’s a high chance that this slot creation was born thanks to the popular Marvel TV series, Loki, which launched at exactly the same time. Expect an action-packed adventure in this ancient 5-reel slot, bursting with 20 active paylines to win across. You may also notice that there are two frozen rows within the game, which can be unlocked when the bonus games become activated. You can play the Loki: Lord of Mischief slot for free or for real money at the top Pennsylvania online slot sites and the best New Jersey online casinos, accompanied by plenty of overpowering chants forming a powerful game soundtrack and the addition of some otherworldly graphics.

The game grid is set across a stunning backdrop, which is very moody and eerie in terms of appearance. There are eight regular symbols appearing on the reels throughout the game, expect the playing card symbols and wild animals such as wolves, serpents, horses, and birds to appear at any given moment. The animal icons can pay anywhere up to 100x the stake when a total of 5 or more appear within the same symbol combination. Most importantly of all, it’s worth watching the golden Wild Symbol, which can pay a wondrous 2,500x the stake if you’re lucky enough to land a total of five in the same winning symbol combination, whilst being able to substitute for most other symbols within the game.

Most interesting of all is the slot’s Mystery Symbol. The god Loki himself will be appearing as the Mystery Symbol within the game, where he has the power to transition into the Money Scatter Symbol, which may just launch you into the luck-filled Lux Reel Feature.

How to Play the Loki: Lord of Mischief Slot

To uncover the hidden treasure of the distant past, adjust your wager accordingly, which can start from a minimum of 0.20 and can increase to a maximum of 200.00 in your chosen currency. The balance and wager menu is located at the bottom left-hand corner of the screen and can be updated throughout the game. To get started after adjusting your wager, simply hover over the large spin button which is located at the bottom right-hand corner of the screen.

The battle of the gods in the Loki: Lord of Mischief real money slot can commence from any of your chosen devices. Play from Android or iOS portable devices including laptops, tablets, or smartphones. It’s almost like being teleported to another world, thanks to the compatibility with all chosen devices.

In terms of the slot bonus within the Loki: Lord of Mischief slot, there is something pretty exciting to land thanks to the addition of Mystery and Bonus Symbols.

In the center of the grid, on the middle three reels, you will notice the Tree of Life Bonus Symbols making an appearance. Landing a total of three of these symbols will activate the Super Lux Reels Feature. Additional rows may appear during this feature, where players will have the choice to choose from three options of differing volatility:

The Lucksome Locks Feature becomes activated when at least two of the Tree Bonus Scatters have landed.

The Gamble Feature can usually be activated when either of the previous features is complete.

The Loki: Lord of Mischief online slot features a default Return-to-Player (RTP) of 96% and is considered a high-volatility game, so we can expect plenty of high-risk, high reward predicaments when playing. There is a fairly generous maximum winning potential capped at 250,000 coins, which is up for grabs during the game. Look to Loki, as certain symbols will have you winning your way towards the biggest win of all.

This mythological masterpiece of a video slot was highly influenced by the hit Marvel TV Series, Loki. The Bonus Features offer the most striking additions to the game, where players have the option to select the volatility, and having this kind of control within the game can work wonders in terms of pocketing the prizes. What’s more is the fact that the overall approach to the game offers an experience that is a little more immersive in comparison to the majority of other slots on the market, meaning that players can take charge of their own experience and uncover plenty of ways to win.

Now if mythological slots are a favorite, then perhaps gearing up with the greek gods of the past, may just be a nice follow-up theme after this one. Why not try Pragmatic Play’s Gates of Olympus slot, and watch in wonder as all of the action unfolds in the heavens above.

Who created the Loki: Lord of Mischief slot?

The Loki: Lord of Mischief slot was created by the top-notch slot game software provider, Blueprint Gaming in partnership with their sister studio Lucksome. They are the creators of other epic slots which include Divine Links and Way of the Tiger.

What is the RTP in the Loki: Lord of Mischief online slot?

The default Return-to-Player (RTP) within the Loki: Lord of Mischief slot is capped at 96%, which is standard when considering the fact that this is a high-volatility video slot.

What is the maximum win in the Loki: Lord of Mischief slot?

Players can expect a maximum winning potential capped at 250,000 coins when playing for high rewards in the Loki: Lord of Mischief video slot.

What is the best online casino where I can play the Loki: Lord of Mischief slot?

There are dozens of premium online casinos to choose from, we’d say it’s a case of choosing your favorite casino, especially the ones with the best bonus offers and from there you can start battling your way through the Loki: Lord of Mischief video slot.

What online slots are similar to Loki: Lord of Mischief?

There are dozens of online video slots with mythological themes. Perhaps, it’s worth going for gold with a completely different god. Why not try Power of Thor or Gates of Olympus by Pragmatic Play, to meet with different kinds of gods.

Is Loki: Lord of Mischief a high volatility slot?

Yes, you’ll find that Loki: Lord of Mischief is a high-volatility slot with an RTP of 96%. The good news is that the game's features allow players to take control of the volatility and actively offer them the choice to dabble between low and high.

Should I always wager the maximum amount on the Loki: Lord of Mischief slot?

The Loki: Lord of Mischief slot is a high volatility slot, and with this, in mind, it is often recommended to place your wagers at the higher end of the scale, in order to be in with the chance of landing much higher rewards.

Yes, you can win real money when playing the Loki: Lord of Mischief slot for real money.

What’s the most I can wager in the Loki: Lord of Mischief slot?

The maximum wager in the Loki: Lord of Mischief slot is capped at 200.00 in the respective currency.

What kind of Loki: Lord of Mischief symbols will I find in the slot?

Aside from the eight regular symbols appearing on the game's grid, players may discover added excitement when collecting Wild Symbols, Scatter Symbols, Mystery Symbols, and Bonus Symbols, all of which pave the way to even more fully-loaded slot bonus features.