Genies are the perfect choice for slot games. They promise incredible treasures and sometimes a few wishes. Whatever it is, magic is a great choice for slots, as they too can produ... Read Full Review 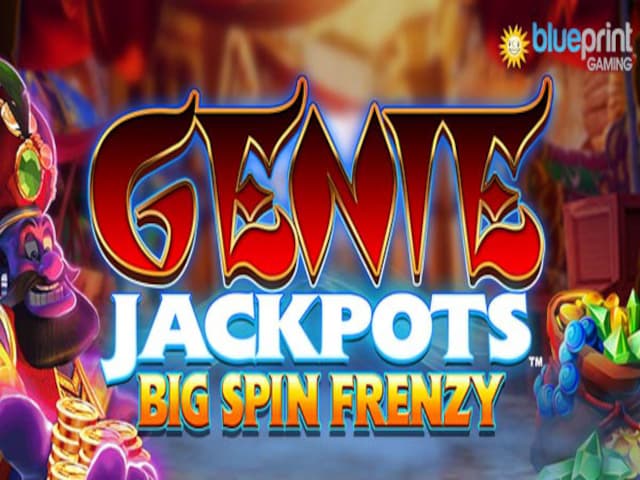 Genies are the perfect choice for slot games. They promise incredible treasures and sometimes a few wishes. Whatever it is, magic is a great choice for slots, as they too can produce enchanting wins. It’s been a while since we’ve seen a good genie slot, though, until Blueprint Gaming ran the show back with Genie Jackpots Big Spin Frenzy.

With that kind of name, fun is guaranteed. The slot will take you into a cave of wonders where magic puts on a show. This is a medium to highly volatile slot game with an RTP of 95.32%. If you think that’s a bit low, you’re right. But you can wager that this genie will surely fulfill your wishes if the right symbols align.

You get to win across 10 paylines in this magical reel-spinnin’ bonanza that perfectly pairs the best of both slot worlds – the vintage and modern school of slot ‘thought’. If you want to try it yourself, you can do it for free in any Blueprint Gaming top New Jersey online casino and recommended Pennsylvania online slot site.

Genie Jackpots Big Spin Frenzy doesn’t reinvent the wheel when it comes to layout and design. As a matter of fact, it uses a familiar 5x4 setup with quite a modest design. The reels are set against the cave of wonders, with statues of the titular genie flanking them both. All the controls are in their usual spots, so spinning the slot is pretty easy.

Not surprisingly, the genie can trigger a slew of magical features that pay big, but more on that later. It leads the list of premiums with payouts of 1,000x for five on a line. He’s followed by the turban, pair of swords, a bag of rare gems, and a book of wishes. The other symbols are divided into medium and low-paying, consisting of stacks of coins and the usual card royals.

You can spin the Genie Jackpots Big Spin Frenzy slot on any Android and iOS device with ease. The mobile slot was developed on the HTML5 platform, which means you won’t need to download an app to play it on the go.

Choose a wager between $0.10 and $100 per spin and hit the Spin button to rub the lamp and start the magical adventure. This is a slot where the top features are available in the Bonus Round, not the base game. Still, the base game is pretty solid thanks to the Wild and the Genie. Land five Genies on the reels for top payouts of 1,000x the bet.

That’s a return we rarely see in base games. It makes sense for a Genie to offer such a magical payout, but he plays an even bigger role in the Free Spins Round.

Three or more bonus symbols will trigger the Free Spins Round. When two appear on the reels, the remaining reels will spin slower and longer so you can get that all-important Scatter.

During the Free Spins Round, the Genie shows all his magical moves. Whenever a Genie Wild lands on the reels it collects all those coins with values. If you get several Genies on the reels, the values will be collected multiple times. The best thing about this round is that the Genie Wilds are collected, upgrading the Wild to new features on every 4th.

The Genie Jackpots Big Spin Frenzy slot has an RTP of 95.32% which is a bit low. However, the great visuals and fun gameplay with top features make it an enchanting real money slot you don’t want to miss.

Have you ever thought about your Genie wishes? Like the biggest slot bonus? The Genie can grant all three in the Bonus Round where Wilds take the centre stage and collect all those coin values in sight. We’re disappointed the Genie doesn’t step in randomly to boost your wins, but the upgrades he triggers in the Free Spins Round more than make up for it.

The Genie Jackpots Big Spin Frenzy slot was developed and released by Blueprint Gaming. You might have heard about the studio if you played a certain slot titled Fishin’ Frenzy Megaways. Blueprint Gaming also has a few branded titles in the portfolio in The Goonies and The Goonies Return.

The RTP is lower than the average for medium to highly volatile slots at 95.32%. But don’t worry about that. The math model and the volatility have made sure that you get a decent winning shot on each spin, even more in the bonus.

How many paylines does the Genie Jackpots Big Spin Frenzy online slot have?

The Genie Jackpots Big Spin Frenzy slot has 10 paylines. Those are non-adjustable, so you’ll always play for the top rewards. Some players would have liked to see more paylines or the Megaways engine, but for what it’s worth, we think the 10 paylines do the trick.

Officially, the volatility is somewhere between medium and high, but if you ask us, it’s a bit on the highly volatile side. Expect plenty of dry spells and varied wins. You can get the biggest rewards in the bonus game where the Genie Wild upgrades its features to pay better returns.

The Genie Jackpots Big Spin Frenzy slot is suitable for beginners and high rollers too. You can place a minimum wager of $0.10 which is pretty low for new players or to practice. With that price, you get 10 spins per pound, which should be enough to get a sense of the volatility.

It shouldn’t come as a surprise that the Genie Wild is the highest-paying symbol. Apart from completing wins by substituting other symbols in winning combinations, it can pay up to 10,000x for five on a line.

Can I play the Genie Jackpots Big Spin Frenzy slot on my phone?

Yes, you can. The slot was developed on the HTML5 platform, allowing it to run on instant-play platforms. You don’t need to download an online slot app to spin it on the go. It works perfectly well via mobile browsers.

How do I get to the Genie Jackpots Big Spin Frenzy Free Spins Round?

You need at least three bonus Scatters to get to the Bonus Round. Wilds are then collected for Genie upgrades that pay more than the regular Wild. You get upgrades on every 4th Wild you collect, and a set of 10 free games to go with it.

Yes, it is, if you don’t mind the lower RTP and the basic base game. If you can get past it, trust us – enchanting wins await in the Bonus Round. The upgrades are more than enough to make it rain golden coins upon you, so cross your fingers for the Bonus symbols.

When was the Genie Jackpots Big Spin Frenzy slot released?

The Genie Jackpots Big Spin Frenzy was released on August 25, 2022.