It’s about to get urban in dialogue and gameplay around here, so now would be an excellent time to brush up on your street talk. The word Ballin’ itself is actually a slang ter... Read Full Review 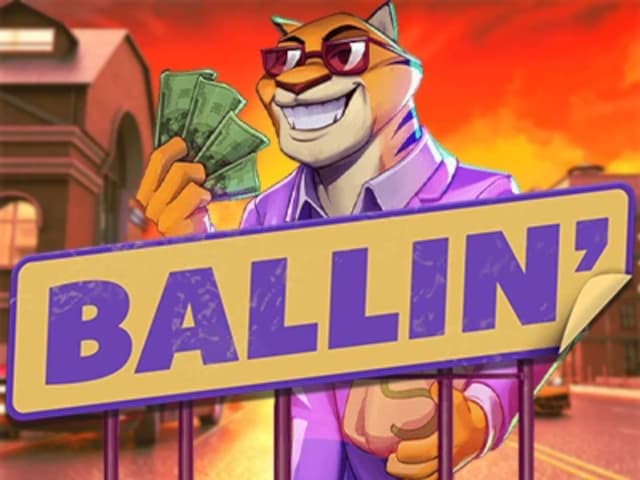 It’s about to get urban in dialogue and gameplay around here, so now would be an excellent time to brush up on your street talk. The word Ballin’ itself is actually a slang term, which is usually used to refer to a “player” or a person who is living a rich and famous lifestyle. The visual image we’re presented with is of the fast and flashy cars, dollar bills overflowing all over the stretch, and men and women shining like stars in fancy clothes without a worry in the world. This visual description isn’t actually too far off, as Blueprint Gaming’s Ballin’ slot is set against a glitzy backdrop, in the middle of what appears to be the definition of a sunset city. The flashy humans, however, have been replaced by street cats dazzling in expensive gear and other symbols which represent the rich and famous lifestyle appearing across the game grid.

The Ballin’ slot takes place across a 5-reel game grid, where there are a total of 20 active paylines. As we mentioned earlier, as soon as you make your way onto the grid, you will most definitely feel as if you stepped out into the middle of Miami, where you’ll notice a Lamborghini or two in sight. The question is, what kind of luxury prizes will you be laying hands upon? Solid gold rings, Rolex watches, or maybe a suitcase loaded with some hefty slot bonuses.

Thematically, the Ballin’ slot packs in a punch with very fitting, crisp, clean, and striking graphics along with a complete match of a soundtrack. The grid is packed with ten regular paying symbols, which are differentiated between low and high-paying symbols. There are a total of six special symbols, which consist of Scatter Symbols, Wild Symbols, and Bonus Symbols, which can lead to one of the two main bonus features.

The Wilds appear as Wild x2 and Wild x3, however, they will only make their appearances on reels 2,3, and 4, and can substitute for all other regular symbols, apart from the Scatter Symbol. The Super Star Wild symbol can also appear on the above reels, a multiplier can be awarded 2x or 3x. It also has the power to upgrade any other Wild Symbols which may appear on the reels.

Like almost all new online slots, the Ballin’ slot is compatible with all devices, including mobile smartphones, tablets, desktops, and laptops. All devices would need to be supported by iOS, Android, and Windows, to get the best mobile slot experience out of the game.

How to Play Ballin’

Initial wins can be formed by forming the same symbol combinations, before collecting the special symbols which can unlock a series of bonus games and additional features.

The Ballin' keeps things has not gone overboard with its addition of features,  and simply offers the following features: Big Balls Free Spins, as well as the  Even Bigger Balls Free Spins, which also doubles up as the Super Star Bonus. The players who love to take matters into their own hands will be glad to know that there is the option to purchase the bonus features.

The Big Balls Free Spins activates, when a player Lands bonus symbols on reels 1 and 3, in addition to a Big Balls symbol on reel 5, which will then trigger a total of 10 Big Balls Free Spins. When one of the Wild Multipliers lands during the activated feature, it will become sticky on the reels for the duration of the round. When an entire reel becomes filled with the Wild Symbols, it will award an additional 4 Free Spins. This can only take place up to three times.

The Even Bigger Balls, also known as the Super Star Free Spins, occur when a player Lands bonus symbols on reels 1 and 3, as well as a Super Star symbol on reel 5, and will trigger 6 of the Even Bigger Balls Free Spins. In the same way, the Wilds will appear from reels 2 to 4 with added multipliers and will become locked in position until the feature draws to a close. If all of the places on a single reel become covered with Sticky Wilds, with 2 Free Spins.

There is also the Buy Free Spins option. This can be activated by pressing the Bonus Buy button, where players can purchase a round of Big Balls Free Spins or Super Star Free Spins for 100x the bet and the Super Star Bonus for 150x the bet.

The maximum multiplier win is at an increasingly high amount of 10,000x the stake for players who know how to bring their best face to a high-volatility slot. This is also demonstrated with the default return to player (RTP) of 96.01% which is much higher than the average, and we’d go on to say that it is more than a fair share, for anyone who cashes in and lands their share of the luck.

Overall, we’d say that Balling’ is one hell of a banger, in urban slot terms. Everything from the quirky and cool theme to the staggeringly high maximum multiplier win of 10,000x, to the average RTP of 96.01%, and the very simple yet rewarding bonus features, will be leading us to a future filled with abundance.

What is the Ballin’ slot about?

The Ballin’ slot, as the game title suggests, is based on the rich and famous way of living, think luxury goods and flashy cars, and plenty of bling, all with a very urban and street-smart theme, thanks to the inclusion of alleycats dressed in their best attire.

When was the Ballin’ slot released?

The Ballin’ slot is a new one, only recently making its way to the online slot market and a rather rewarding release as we draw towards the close of 2022. It’s made its way to gamers at the best time of year, as we’re all craving a rough, ready, rich and rewarding adventure.

What bonus features can be found in the Ballin’ slot?

Blueprint Gaming has kept the bonus features quite simple within the Ballin’ slot, where there are Wilds, Scatters, and other Multiplying Wilds. The bonus features themselves, consist of two different variations of Free Spins as well as a Purchase Feature option which can be bought for 100-150x the bet, depending upon the desired feature.

Can I play the Ballin’ slot with Bitcoin?

Playing the Ballin’ slot with Bitcoin depends entirely upon the online casino that you are paying from. It’s best to check directly with the online casino of your choice, to see if Bitcoin is an accepted method of payment for that particular casino, before considering real money gameplay.

Does the Ballin’ slot have a Free Spins Round?

Yes, the Ballin’ slot not only has one, but two different types of Free Spins to be activated, all of which contain their own share of rewards and real cash prizes, and even this proves there is no need for heavily complex bonus features within any slot game.

What is the RTP in the Ballin’ slot?

The return to player within the Ballin’ slot is capped at 96.01%, which is a rather high rate and considerably higher than the average RTP for any online slot. This is great news, as most notably of all, this is a high volatility slot, and so the guarantee of a decent return restores hope for gamers in the game itself.

How much can I win playing the Ballin’ slot?

The maximum multiplier win in the Ballin’ slot is capped at 10,000x the bet. This is great news for the high rollers, who are on a constant mission to win bigger and better, and it’s safe to say that it’s totally possible to make all of this happen and more when playing this video slot.

What is the volatility level in the Ballin’ slot?

Can I play the Ballin’ slot from a mobile device?

Yes, you can play the Ballin’ video slot from your mobile smartphone, however, you can also get playing from tablets, desktops, and laptops, depending on your mood and schedule. It’s best to play from your mobile when you’re out and on the go, with very little time to spare spinning and winning.

What special symbols will I find in the Ballin’ slot?

In the Ballin’ slot, players will find a variety of special symbols. There are a number of Wild Symbols, as well as the Scatter Symbols to collect in order to generate winning payouts and trigger the bonus features, so these are ones worth looking out for.