There was Alice &amp; Wonderland, and then there was the rabbit hole, how can we possibly know what to expect when heading down that route? Based on Lewis Caroll’s original series of ... Read Review 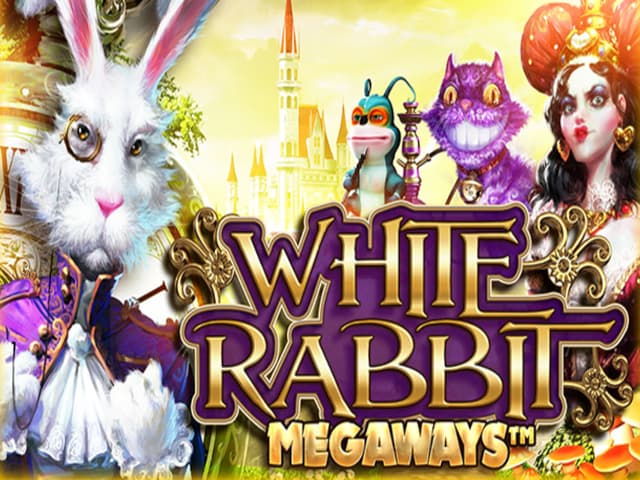 There was Alice & Wonderland, and then there was the rabbit hole, how can we possibly know what to expect when heading down that route? Based on Lewis Caroll’s original series of stories set with a lot of the weird and wonderful experiences in wonderland, the White Rabbit Megaways slot by Big Time Gaming will most definitely prepare you to be thrilled, chilled and fulfilled – so you can expect just about anything.

Expect a rainbow of discoveries to present themselves throughout the course of this epic slot. You’ll be glad to know that all of the original characters will be making a guest appearance on the game grid throughout your journey into the new world’s version of wonderland. Off and away you can go if you can dig your way out of this world. At your own risk! Big Time Gaming’s White Rabbit Megaways slot can be enjoyed online for free or played for real money at all top New Jersey online casino sites and the best Pennsylvania online slot sites.

White Rabbit Megaways consists of a 5-reel game grid, bursting with lots of vibrancy and plenty of quirks to keep you immersed in this rather mysterious quest. The maze towards the magic is loaded with 248,832 ways to win, so the possibilities of locking in the rewards are most definitely endless. Each of the reels contains between two and seven of the stunningly formed game symbols, where the megaways wins become much higher depending on the number of symbols appearing on an individual reel at any given moment. In the event that you see a total of 7 symbols appearing in each reel, you will enjoy the game with a total of 16,807 Megaways. However, to reach the 248,832 ways to win, you’d have to trigger the Free Spins Bonus feature, where you’ll notice that the number of symbols increases to a total of 12 symbols.

Based on Carol’s novel, the White Rabbit Megaways real money slot has been formed with stunning, well-rendered graphics which align consistently with the game’s original theme. Set against a surreal woodland backdrop, with a grid bursting with symbols featuring the regular letters and numbers, as well as an appearance from all of the favorite characters, such as the evil twins, cups of tea, the mad hatter, toadstools and gems. The Queen of Hearts is the most valuable of all, offering a 25x the wager for a total of 5 appearing within the same winning symbol combination. Alice is the Wild symbol, making appearances on reels 2,3,4, and 5, substituting for most other symbols apart from the Mad Hatter Scatter symbol and Cupcake Bonus symbols.

The quest itself may be complex and rather cryptic if we’re focusing on the original tale, but the gameplay is both simple, and easy to follow making overall. The Paytable, Information, Audio Settings, Spin, Autospin features, and the Bet Adjusting menu can all be accessed from the right-hand side of the screen. To adjust your wager, click on the stake tab and increase or decrease accordingly using the left and right arrows. The minimum wager starts from as low as 0.10 and can be increased up to 20.00 in your respective currency, then once you have made all of the necessary adjustments, simply hit the Spin or Autospin button.

The stunningly designed White Rabbit Megaways has been created with the utmost precision, meaning it can be enjoyed from quite literally any device regardless of the screen size. Tune in and grab your slice of the challenge from mobile smartphones, tablets, laptops, and desktops, which are supported by iOS, Windows, and Android. Enjoy from the comfort of your own space, or grab and go!

The White Rabbit Megaways slot boasts a total of four, fantastic bonus features, which include: Down the Rabbit Hole Free Spins, Sleeping Caterpillar Wilds, the Feature Drop Feature, and the Extending Reels Feature, which adds even more symbols and action to the reels.

The Caterpillar Wilds Feature is often snoozing but often comes to life at random, where he will blow a total of 12 smoke rings onto the reels. Every landing smoke ring will contribute additional Bonus Wilds onto the game grid. You’ll notice a total of up to four Bonus Symbols being added to the reels, where a multiplier of between 2x and 3x will be applied. The multipliers can be multiplied beyond the total amount.

The Down the Rabbit Hole Free Spins Feature will be activated when the Magic Hare Symbol lands on reels 2,3,4 and 5, awarding a total of 15 free spins, and you may also receive some unexpected visits from the Cupcake Symbols.

If you notice the Cupcake Symbol landing, this will trigger the Extending Reels Feature, adding up to 12 symbols to the reels.

For players who simply must take matters into their own hands, there is a Feature Drop Feature. This allows players to purchase the Rabbit Hole Free Spins Feature, which will cost you 100x your total stake.

The White Rabbit Megaways slot is a medium-high variance video slot, containing a higher than average RTP return-to-player of 97.24%, which offers a considerably high return providing you do strike it lucky within the game. The maximum multiplier win can reach staggering new heights, awarding 17,420x the bet if you play your cards right.

The White Rabbit Megaways slot is a very rewarding slot by Big Time Gaming – which you’ll definitely want to try at the newest slot sites with the best slot bonus, if you haven’t already! Overall, the White Rabbit Megaways slot exceeds expectations in every sense, from the glorious graphics to the magical multiplier wins and the brilliant bonus features – the game delivers to the highest possible standards in every way.

The White Rabbit Megaways slot was created by a top video slot provider called Big Time Gaming, which operates successfully within the online gaming market, having such slot hits as Bonanza Megaways, Who Wants to Be a Millionaire Megaways, and Extra Chilli Megaways.

In what year was the White Rabbit Megaways video slot released?

The White Rabbit Megaways slot was introduced to the online gaming market in October 2017 and has been exceeding the expectations of players from that moment onwards.

What special features does the White Rabbit Megaways slot have?

The White Rabbit Megaways slot has a total of four epic bonus features. There are Down the Rabbit Hole Free Spins, Sleeping Caterpillar Wilds, the Extending Reels Feature, and the Drop Feature Feature with the Free Spins purchase options, for those players who don’t have the patience!

Which special symbols do the White Rabbit Megaways have?

The White Rabbit Megaways slot contains a variety of regular symbols, a Wild, a Scatter, and a Cupcake Bonus Symbol, all of which pave the way to some very generous payouts and additional bonus features.

How much can I win when playing the White Rabbit Megaways slot?

Players will be delighted to know that the maximum multiplier win reaches 17,420x the bet in the White Rabbit Megaways slot, for those who will become aces of the game, the possibility to gather some staggering wins is most definitely possible.

What is the RTP of the White Rabbit Megaways slot?

The White Rabbit Megaways slot offers an impeccably high return to players of 97.24%, which is a nice surprise given the medium-high volatility nature of the slot.

Is the White Rabbit Megaways slot a high volatility adventure?

The White Rabbit Megaways slot is considered to be a medium-high volatility slot, so we’d say to expect the best of both worlds when getting lost within this marvellous mission.

Can I play White the Rabbit Megaways slot for free?

Yes, there is a free demo version of the White Rabbit Megaways slot available to play at your favorite online slot sites, and it’s a perfect way for you to get a feel for the game without breaking the bank.

What’s the highest wager I can place on the White Rabbit Megaways slot?

The highest wager is 20.00 in the player’s chosen currency when playing the White Rabbit Megaways slot, which we’d imagine is quite affordable, adding to the appeal for all budget sizes.

Can I win real money prizes with the White Rabbit Megaways slot?

Yes, the great news is that you can play with real money to win real cash prizes when playing the White Rabbit Megaways slot, which appears as a result of the symbol payout and winnings that accumulate as a result of the bonus features.