The Slotfather is a hugely popular online slot from Betsoft that we thought would be hard to improve. But we have been proved wrong, as we can now review The Slotfather Part ... Read Review 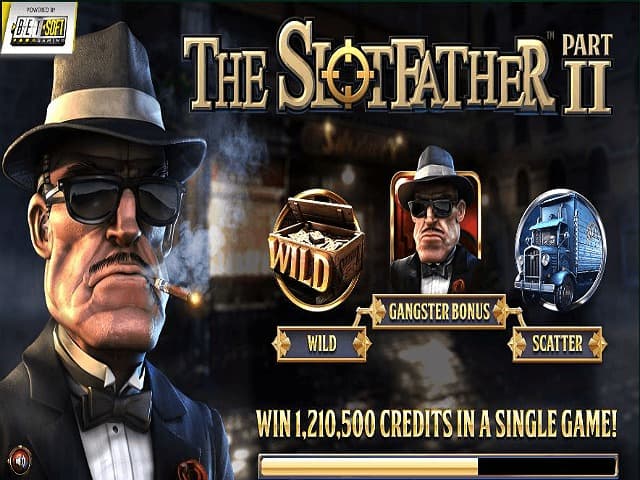 The Slotfather is a hugely popular online slot from Betsoft that we thought would be hard to improve. But we have been proved wrong, as we can now review The Slotfather Part II slot machine, that has even more advanced graphics and enhanced gameplay.

The Slotfather Part II is a five-reel game with a 243 ways to win layout that’s available to play on your PC, iOS, or Android mobiles. While the incredible looks, which wouldn’t be out of place in a Hollywood animated movie, will catch your eye, it’s the amazing features that will keep you coming back to this game. The Mafia themed symbols take you to free spins with a special reward from The Boss at the end, plus there are reel re-spins, and a prize-picking round where you claim your cut of the action.

If you are in favor with the Mob, your take can reach 300x the total stake and at the maximum bet level, that’s an impressive 37,500.00. You can even multiply this by playing the exciting gamble game that has the potential to double wins over and over.

Let us make you an offer. Read our review, then play The Slotfather Part II online slot at one of the highly rated casinos which carry the Betsoft range.

The design of The Slotfather Part II slot machine is exceptional, with 3D style graphics and highly detailed symbols. The 1930’s setting is beautifully captured, with a mobster in his pin-stripe suit sitting to the left of the reels, machine gun in hand. He’s in a typically Italian-style restaurant and the 5x3 grid of reels are set within a gilded picture frame.

Look below the reels and you will see a set of easy to use control buttons. The 243 ways to way mechanism means that you win by landing three or more matching symbols in any places on adjacent reels, starting from the left.

You play The Slotfather Part II online slot with 25 coins, and by changing the value of coins, have a bet range from 0.25 to 125.00 per spin. Along with the option to change stakes between spins, you can also select an automatic spins mode that runs for up to 100x and can decide on the volume of the soundtrack.

The best option, and one that’s only available via online casinos, is the chance to play on a computer, Android, or iOS mobile. It opens games such as The Slotfather Part II to a much wider audience who like the convenience of being able to play whenever they are and whenever they want.

To make it easier to use, the mobile version moves some of the control buttons around, but otherwise, it’s the same as the desktop game. Both versions feature a payout table, opened up via the small question mark button in the bottom corner. This shows you that realistic images of the Tower of Pisa and a meat cleaver pay the least, returning prizes of two, 15 and 60 coins when seen on three, four, or five reels. Symbols of a whisky glass, a wad of banknotes and cards pay the mid-range prizes. The Slotfather himself is the most valuable symbol of his game, worth 25, 50 and 300 coins.

This is a medium variance game that strikes a good balance between prize values and the frequency of winning spins. Like most real money slot games, it has an excellent payback percentage, which in this case is set at 96.6%.

The rate of winning spins is helped by the box of coins, which is a wild symbol that can act as others to complete combinations. It can’t replace the vintage-style truck, which is no doubt carrying a haul of illicit booze across the border.

It’s a scatter symbol, and if you see the truck in any three, four, or five places at once, it triggers eight, 12, or 20 free spins. During these games, all wins are doubled in value, and at the end of the round, there is a 'Big Boss Bonus' to collect. It’s an instant cash prize from the head The Family, as a reward for smuggling the goods.

Full-height symbols of three gangsters can appear at any time. These wise guys pay small prizes of five, 20, and 35 coins when you land matching gangsters on three, four, or all five reels. Any two gangsters award a re-spin of the reels, giving you a shot at landing a third. On top of this, any three or a kind trigger the Gangster Bonus, which takes you to a second screen. You get to pick from folders spread out on a table, claiming prizes with each, until you land on the ‘Collect’ folder.

Wins can be gambled in an exciting, but risky feature. Correctly guess if a coin will land on heads or tails to double your prize and keep on going if you feel lucky. A wrong pick at any stage sends you back to the game with nothing.

This is one of the best-looking slot machines on the market, only matched by the other 3D effect games in the Betsoft range. Perhaps a little more animation from the characters would be cool, but it’s not really an issue.

The great style is matched to the exciting features, although total newcomers could try a simpler game, such as Chicago, by Novomatic. You’ll feel like you are extorting our recommended New Jersey online casinos and top Pennsylvania online casinos when you sign up, and play The Slotfather Part II slot machine, as they hand out free bonus funds as soon as you open an account.