Slots based in and around the hunt for precious gems have proved to be a virtual goldmine for casino games developers. More Gold Diggin’ comes from Betsoft and it’s another in ... Read Review 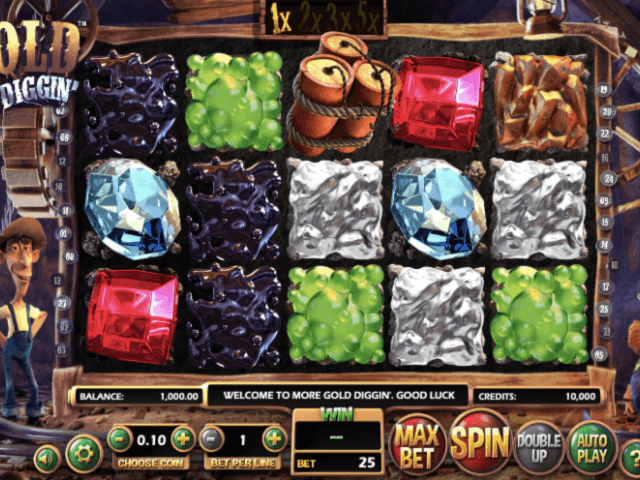 Slots based in and around the hunt for precious gems have proved to be a virtual goldmine for casino games developers. More Gold Diggin’ comes from Betsoft and it’s another in their range of beautifully designed 3D effect games that have become such as signature feature for the company.

You get to join Jeb and Cletus, a couple of hapless prospectors, deep in their mine, where they have discovered shiny diamonds, rubies and emeralds. The gems appear across five reels, filling the screen with color, but look out for the explosives, as these blow open a couple of rewarding bonus features.

Winning symbols vanish in a cascading reels system, and wild dynamite helps to create extra combinations. Win multipliers accompany each cascade, with a free spins bonus round giving you even more potential to collect some big rewards. Be sure to visit Daisy, who deals out cards, doubling your win if your hand beats hers.

This action-packed game is available to play across PCs, iOS and Android mobiles at the best Pennsylvania online casinos and recommended New Jersey online casinos. You don’t need to leave home to play the More Gold Diggin’ slot machine and we’ve dug through the dirt to find the shiniest online casinos that carry this and the rest of the Betsoft range.