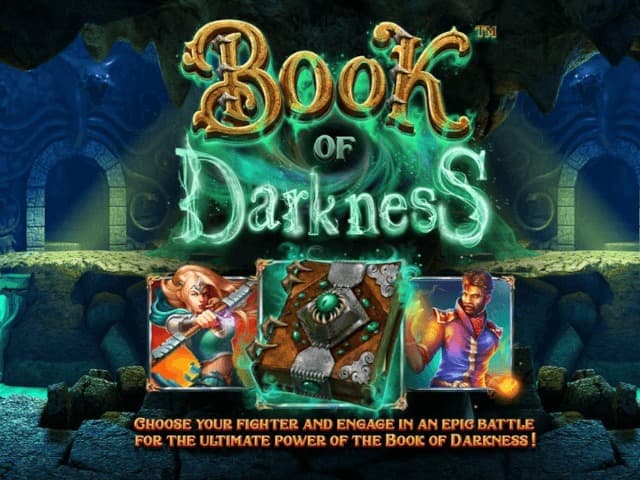 ‘Book of’ slot games have always been tied to an Egypt-theme. However, this time around, Betsoft has decided to go in another direction, instead releasing the Book of Darkness video slot with another theme. As the name suggests, it’s a mystical and dark slot of fantasy and sorcery that will surely get your attention.

A 5-reel slot game with 10 paylines, the Book of Darkness slot is situated in a dark dungeon. On the reels, you’ll find magical daggers, potions, and stylized card royals, as well as a dark wizard, a huntress, and the famed book.

It’s a game full of mystery that will surely appeal to horror fans. Fight the dark wizard and you can win up to 1,056 times your stake in this magic-laden and dark slot game.

The Book of Darkness slot machine has a pretty familiar layout. It comes with 5 reels in 3 rows populated by symbols that fit the theme. The book is the central part of the game. It’s among the highest-paying symbols (20x for five on a line) and acts as the wild.

You’ll also see a Dark Wizard and Huntress which are the game’s antagonist and protagonist. They both pay 25x for five-of-a-kind, much more than the card royals which pay anywhere from 5x to 15x for the same combination.

In terms of graphics, Betsoft has done a great job with the slot game. It looks just dark enough to fit the narrative and the ominous sounds in the background set the right tone. It’s a world of black magic and mysteries and Betsoft has got things pretty right.

The journey through the dark world begins with you setting your bet. It goes between 0.10 and 10 coins per spin in real money. As mentioned, the game has 10 winning paylines that can’t be adjusted.

Hit the Spin button to start the round. You’ll be hoping to land five of the character symbols to hit the big wins. The book is both the wild and scatter, triggering a slew of exciting features.

You won’t see much action in the base game until one of the special features are triggered. These include the Clash for Power activated when the dark wizard and huntress appear next to a book symbol.

The slot also makes great use of the other features that are tied to the game’s characters.

The first special feature in the slot game is called Clash for Power. It is triggered by the huntress and dark wizard appearing next to a book symbol. At this point, you choose your hero and the free spins go on until a winner is declared. Whenever a character symbol lands on the reels, they expand to cover it and fill the respective meter. Whoever fills it first is the winner, and if your guess was right before the round begins, you advance to the Shadowform free spins.

You will get 10 free spins in this round. If the dark wizard won, 5 symbols will expand on the reels. If the huntress won, you get a 5x multiplier that applies to wins involving crystals, rings, or the character symbols.

The Book of Darkness slot also comes with regular scatter free spins. Land three or more books to win up to 20 free spins. During this round, any symbol apart from the book can be selected to expand whenever three or more reels show it.

Thanks to this feature, you can land some pretty solid winning combinations during the free spins round.

Betsoft’s Book of Darkness slot comes with an above-average RTP of 96.48%. The game’s volatility is not listed, but from what we’ve seen, it’s medium-high, so be mindful of your bets.

The maximum you can win with the special features is 1,056x your bet which is pretty average.

If you love black magic themes and dark dungeons, the Book of Darkness slot is a perfect choice. Betsoft’s slot game has plenty of special features to keep you interested and pays over 1,000 times your stake. Play it for cash right now at one of our recommended online casinos and enter a world of dark sorcery and golden treasures.